When US civil rights campaigners of the last century took to the streets, they dreamt of a day when black Americans would enjoy the same educational opportunities as everyone else in the country. Sabrina Cannon has lived that dream — and it has landed her deep in debt.

Cannon, 33, was the first member of her African-American family in Buffalo, New York, to go to college, using $100,000 in federal student loans to obtain a marketing degree in 2010 from Niagara University, a nearby private institution.

But she struggled to find work in her field during the tough times that followed the financial crisis, and only earned enough from other jobs to make minimum payments on her borrowings, leaving the principal untouched.

So, Cannon switched gears. She decided her future was in healthcare — specifically, mastering the alphanumeric code doctors use to keep track of patients — and she went back to school part-time to obtain a second degree in 2017 from State University of New York Polytechnic Institute. Resuming her studies allowed her to put payments on her first student loan on hold while she was in school, but it also required her to take on more debt to obtain new credentials.

Part 2 — The trap of student debt

Now Cannon is making better money as a medical coder, but owes $120,000 in student debt — more than when she started university a decade and a half ago. Her credit history is so blemished that she was recently turned down for a mortgage, and only last year, she took a temporary second job as a grocery delivery driver to help pay off her college loans.

“I did what we were all told we were supposed to do, go to college so you can get a good job to make enough money to change your situation,” she said. “I would have been better off not going to college.”

Cannon is far from alone in her disappointment. For a disproportionate number of black Americans, the pursuit of a university degree has led to a new kind of poverty rather than prosperity — dashing decades of hopes that increased access to higher education would narrow the US racial wealth gap.

The underlying problem is that black university enrolment rose in recent decades just as the use of debt to finance US higher education exploded — and costs soared along with all the money pouring into the sector.

Student debt, most of it provided by the federal government, reached $1.75tn this year, according to the Federal Reserve, as state budget cuts led to increased costs at public universities and private institutions raised annual charges for undergraduates to beyond $80,000 a year in some cases.

Black students are more likely to take out loans to finance their education and to borrow more when they do — with many taking on debt, as Cannon did, to improve their employment prospects after the Great Recession. Thirty per cent of black households carry student debt, compared with 20 per cent of white ones and 14 per cent of Hispanic households, the Fed said in 2019. The median black borrower owes $30,000, compared with $23,000 for the median white borrower.

Paying back these debts is turning into a decades-long struggle for many black borrowers. Twenty years after starting college, the median black borrower owed 95 per cent of their student debt, while the comparable white student had paid back 94 per cent, according to a 2019 study by the Institute on Assets and Social Policy at Brandeis University. Three-quarters of black borrowers owed more on their student loans in 2019 than when they took them out, reflecting the accrual of interest, Brookings found.

Some researchers compare the impact of educational debt loads in the black community to the ravages of subprime mortgages in the financial crisis. In both cases, credit products that were supposed to help borrowers increase their wealth had the opposite effect, draining resources from the disadvantaged — a process social scientists call “predatory inclusion”.

“We see student debt going up and up and the reason is that people can’t get out from under it — they can’t get to the (loan) principal,” said sociologist Louise Seamster of the University of Iowa, one of the authors of the Social Currents study. “If you were trying to set up a system that produced one outcome for one group of people and another outcome for another group of people, I don’t think you could do better than this.”

Black Americans fall behind in many cases because they started out with so little in the first place. Like other students from disadvantaged communities, they are more likely to work long hours at outside jobs while in school and to leave school without a degree. They are also more likely to be recruited by for-profit schools that have been accused by critics of preying on students with federal education benefits by charging excessive prices and offering lower-quality teaching.

Family needs can make things even harder on black students. Based on nearly a quarter century of data, the Federal Reserve Bank of St Louis found in a 2017 study that white college graduates were more likely to receive financial assistance from their parents in paying for their education or buying homes, while black college graduates were more likely to be providing money to their parents.

“It’s very difficult for black students to get the same benefits from higher education that white students receive, because of student loans, family wealth and more,” said Julia Barnard of the Center for Responsible Lending, a financial policy group.

Although most student loans are made by the federal government, the resulting debt loads can prevent borrowers from obtaining private sector credit to buy cars or homes or start businesses. For black Americans, catching up on student debt after graduation is complicated by continuing racial inequities in the labour market; government statistics show black Americans earn less than white ones with similar educational qualifications.

“You have to take debt in order to just get the degree, and when you get the degree, you end up going into jobs that pay (less),” said Bernel Hall, chief executive of New Jersey Community Capital, a lender that finances minority entrepreneurs. “You are in trouble by the time you leave school. You just don’t know it yet.”

Black borrowers such as Sabrina Elliot of Charlotte, North Carolina, are finding out just how long it can take to pull free from their student debt. She said she owed $72,000 when she finished her education and after more than two decades of employment her debt has hit $166,000. Her monthly minimum student loan payment has reached $1,393.29, more than the median monthly mortgage payment of $1,122 in her hometown.

Elliot fell behind when she went into government service after earning degrees from the University of Virginia and the North Carolina Central University law school. She took a job as a lawyer for the city of Charlotte and, because the pay was low, requested multiple deferrals on her student loans.

However, that did not stop her interest from compounding. By the time she moved to private sector employers, including Walmart, and started drawing a sufficient salary to make her minimum payments, her loan balance had ballooned. While acknowledging that her educational borrowings are “my responsibility”, she said all that accumulated interest “makes it really difficult for someone to get out from under their student loan debt”.

“I’m part of that 50-and-older group that is still paying student loans,” she said. “So, based on my current payment that I’m making, I’m not scheduled to have paid off this loan until 2035. By that time, I’ll be well into what many would consider retirement age. Who wants to go into retirement age with student loans?” 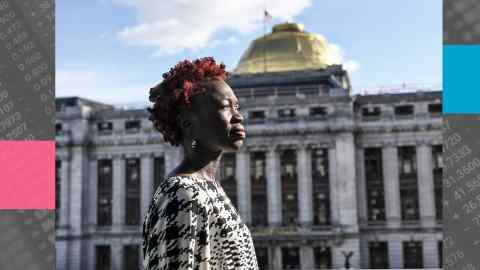 The question of what to do about US student loan borrowers is about to become a hot topic in Washington. Student loan relief measures introduced at the start of the pandemic, which temporarily paused interest and payments for borrowers such as Cannon and Elliot, expire on January 31 2022. Both Congress and the Biden administration are facing pressure to provide additional help.

During the 2020 presidential campaign, President Joe Biden pledged to forgive $10,000 of student debt for every borrower, but he has yet to do so and many progressives in his Democratic party want him to go further. Elizabeth Warren, the Massachusetts senator, said this year that cancelling $50,000 of student debt per borrower would be “the single most effective executive action available to get our economy going and to make progress toward closing the racial wealth gap”.

For her part, Cannon said she is earning a sufficient salary to make the minimum payments on her student loan and hopes to “be able to pay it off eventually”. But she said she would advise younger black Americans to think twice before signing up for federal loans to attend a four-year university.

“Now, I’m just a big advocate for the next generation not falling for this like we did,” she said. “Go to community college or work first, and see what it is that you’re good at and where you can get in, and go from there.”